Centre Manager, Maureen Richardson BEM was named CVS ‘Volunteer of the Year’ in 2011 and now other volunteers contributing to the Centre , its development and activities have been recognised in the Community Voluntary Service (CVS) 2013 awards.

Carol Holman and Carol Singer received individual Certificate of Achievement awards in recognition of the tremendous contribution they have made to the development of The Centre over many years. Carol Holman was Chair of the HCA ( which manages The Centre) for over 5 years helping to oversee The Centre during its major growth and development phase.

Carol Slinger has played a major role in planning and financial management and has been the Parish Council reprsentative on the HCA Committee for meny years.

In addition the volunteers received  a Group Certificate of Achievement with the following being particularly mentioned for their contributions – Maureen Richardson, Brian Jefferson MBE,  Ann Wilson, Damian Brown and Susan Lucas.

All the photos taken at the awards ceremony can be accessed from
http://www.lancastercvs.org.uk/volunteerawards/2013/index.htm 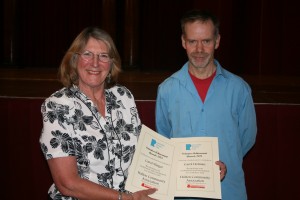