The Centre’s September 13th Jazz Night was a great success, giving local bands a chance to showcase their talents in a ‘classy’ environment.  There were four bands, good fun and dancing as well as an enjoyable light supper.   Over 60 tickets were sold, leading to a profit of nearly £400 on the night to be invested in The Centre,  with a further £80 being raised for the Halton defibrillator.  So a good night all round !

There was Bossa-Jazza-Nova,  which consisted of  Richard Light(tenor sax), Andrew Sayer (acoustic guitar) and Iain Hunter (Percussion)  and delivered warm Jazz and Latin standards for listening and moving to.

Mute Acoustic were a local acoustic duofeaturing Gavin Neil on guitar and Tom Hynes on Cajon. They both recently left LRGS Sixth Form   making their last appearance before leaving for University! They played a mixture of original music and covers, including OutKast’s Hey Ya!, each with their own interesting twist.

Then Much Different were a jazz and funk group much like the Lancaster-based Carbon Funkprint / Free Beer featuring musicians from the Lancashire Youth Jazz Orchestra. They played arrangements of songs from classic and current Funk, Soul, Rock, and Pop artists. The band was only recently formed, and will carry on and develop their own style at the other end of the country – with a number of the band members now heading to the University of Cambridge.

Many thanks to all the organisers and the bands. 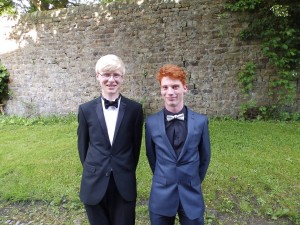