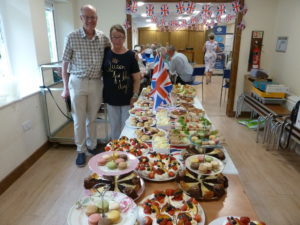 The Centre celebrated the Queen’s 90th birthday with a fantastic lunch of savouries and cakes for the over 55s Luncheon Club.

This special event started with a quiz about Queen Elizabeth II which gave everyone a chance to become involved. Centre Manager Maureen Richardson then showed photographs of the presentation of her British Empire Medal (BEM) in 2013, by Lord Shuttleworth at the Shire Hall Lancaster Castle.  This was awarded for her services to the Community and especially her contribution to the development of The Centre.

The main speaker was Wendy Graham who gave a detailed and light-hearted account of her recent attendance at a Royal Garden Party at Buckingham Palace as recognition for her voluntary services to Cancer Care.   This was followed by Carol Holman’s recollection of her visit to a Royal Garden Party in 2012.

The main focus of the event was the delicious lunch of special savouries and cakes, fit for a Queen, prepared by Angela Kirby and her partner Don.

Brian Jefferson, Chair of Halton Community Association, the Centre’s Management Committee, thanked everyone for coming together to celebrate the special occasion and made a toast to the Queen, the Duke of Lancaster – followed by the singing of the National Anthem.

Maureen thanked Angela for her major contribution to The Centre over the past 3 years.  She said:
“ Last night representatives of The Centre attended the Lancaster District CVS Volunteer Awards with Carol Holman and Don, because Angela been nominated an award.  On this occasion she had not been selected as Lancaster Volunteer of the Year, but her significant contribution had been commended”

HCA Chairman, Brian Jefferson then presented Angela with her CVS Certificate to the applause of the group.

The very enjoyable event concluded with the drawing of the free Raffle which was a lovely flower arrangement created by Evelyn Shaw. 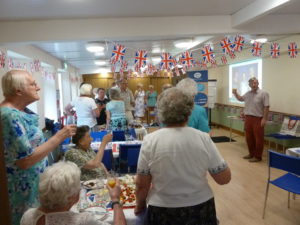