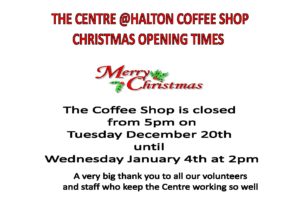 The Centre will be very busy up  until Christmas, and then the Coffee Shop is closed from 5pm on Tuesday 20th December until Wednesday January 4th 2017 when it will re-open at 2pm.

These are the holiday dates for our regular classes and activities:

Dads 5-a-Side, Taylor School of Dance classes and American Square Dancing have their last session on Monday December 19th and will re-start on Monday 9th January 2017

Outdoor Circuits, Toddlers, Indoor Bowling and Knitter Natter will last meet  on Tuesday December 20th,  and will have their next session on Tuesday 10th January

There will be no Physiotherapy appointments on either 24th or 31st December.

Walking Netball and Walking Football will  probably continue until Wednesday 21st December, but may have their last session on 14th December and will re-start on Wednesday 4th January.   Check with the organisers.